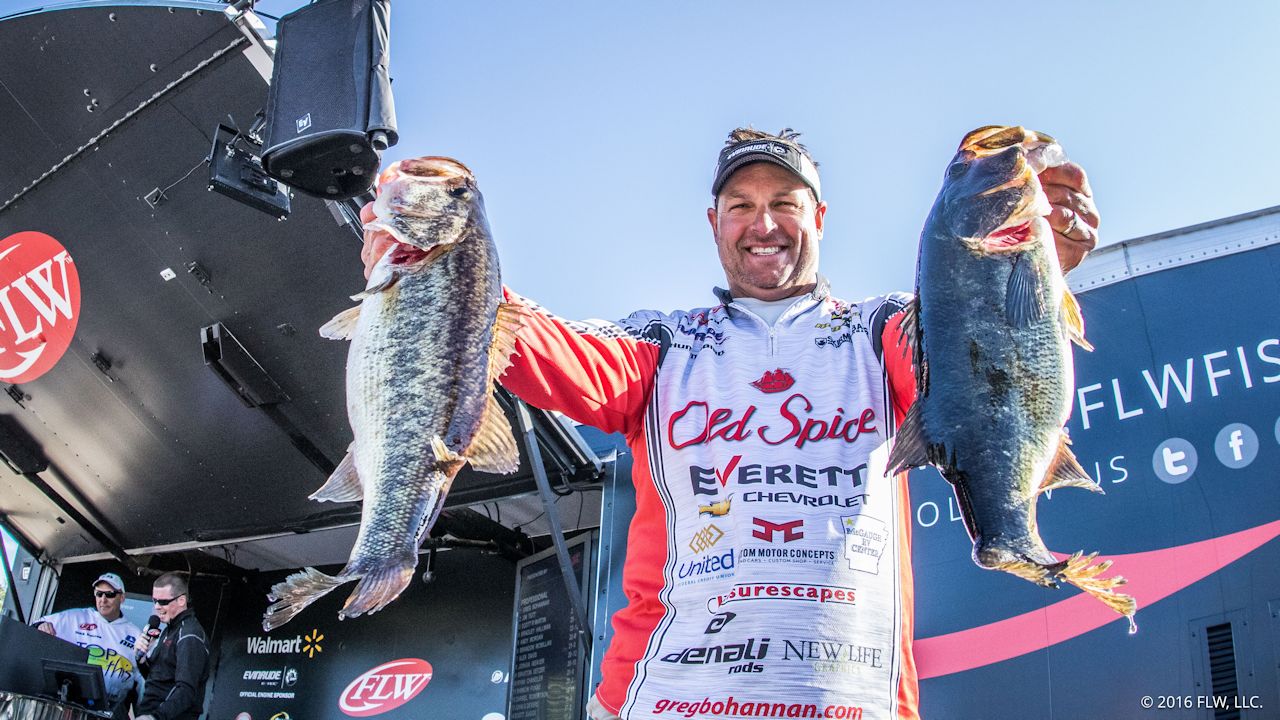 Greg Bohannan thinks this is the year he finally figures out Lake Hartwell. He senses it, believes it. Now, he just has to go make it happen.

In 2011, 2012 and 2014, Hartwell has served as an early-season stop on the FLW Tour schedule. All three times, Bohannon was coming off a money finish in the previous event only to stumble at Hartwell and was unable to recover. This year, he’s hoping to break the trend when the FLW Tour visits the South Carolina fishery in mid March.

Last week, the Rogers, Ark., native posted an 11th-place finish at Lake Okeechobee to set a good tone in the season opener. If he’s to get back to the Forrest Wood Cup for the first time since 2010, he’s going to need to conquer Hartwell (translation: finish in the money) and carry that momentum over to Beaver Lake in his backyard in April before the schedule shifts to the Tennessee River for the fourth and fifth stops.

“I just want to be consistent,” he said. “If there’s one thing I want to do better going forward, it’s to be more consistent.”

This might be the year to do it, too. Bohannan landed Old Spice as a title sponsor – there’s no tie in to FLW or Walmart) in the offseason and it’s taken some of financial burden off of him.

“I’m real fired up this year,” he said. “I feel like I have a renewed vigor on and off the water. I’m just having fun this year.”

Bohannan’s best finish in three trips to Hartwell was the 71st he posted in 2011, roughly three weeks after kicking off the season at Beaver with a 41st.

The following year, he had a money finish in the opener at Okeechobee (51st), but a 116th at Hartwell followed by a 119th at Table Rock Lake short-circuited his Cup hopes. In 2014, it was similar scenario. Following a career-best 2nd at Okeechobee, three straight triple-digit outcomes, including a 115th at Hartwell, took him out of Cup contention. So what gives at the deep, clear impoundment that straddles the Georgia-South Carolina border?

“It’s a deep and clear lake and I should be very good there,” Bohannan said. “I’ve had a couple bombs there, but then I’ll go to the Tennessee River where I shouldn’t be any good and I’ll get checks there.”

He says he’s tried to approach lakes like Hartwell and Smith Lake, to some extent, the same way he breaks down Beaver, but he’s learned that isn’t working.

“They’re herring lakes and I should be smart enough to know how to fish them better,” he said. “Herring lakes are a lot different. I try to analyze all that stuff all the time. I’m going to try to do a better job in terms of finding better keeper patterns on those lakes.”

At Okeechobee, Bohannan laid a good foundation with 13-09 on day 1 before calling an audible on day 2 that led to a 15-15 stringer that bumped him inside the Top 20.

“I followed my guy on day 2,” he said. “On day 1, I’d caught them on the East Wall like a lot of people, but we had a high north wind on day 2. I was out toward the outside and couldn’t fish so I ran up to the North Shore near Tent House Cove. I felt like I could get up there and get out of the wind.”

It turned out to be the right move. He caught a 5-pounder right away and added a couple 4s.

“I knew when I caught that first one it was a good move,” he said. “I had an earlier weigh-in that day so it was key that I made the decision when I did.”
He added 10-03 on Saturday and wound up 11th, just 5 ounces shy of making the Top-10 cut. He went back to the North Shore, but in hindsight he wishes he’d have gone elsewhere.
“Coming out of the lock, I was torn between going back to the North Shore or South Bay. I wish I’d gone to South Bay now.”

While it was a good start to the season, he badly to make the Top 10 in his first event with Old Spice as his new title sponsor. A Top-10 finish also would’ve pushed him past the $600,000 career earnings mark with FLW.

“I’ll get it at the next one,” he said. “I hope to capitalize on it. The last time we were at Hartwell, I was 34th after day 1, but only caught one on day 2. I hope I can learn from that and find some better keeper patterns and hopefully come out of it and go to Beaver in good standing for the Angler of the Year.”

Notable
> As part of his deal with Old Spice, Bohannan is doing appearances at Walmart stores throughout the season and speaking to youth groups and high school fishing teams at each tournament with Old Spice making a $1,000 donation at each stop as part of its Hook, Line and Leaders program.
“They came on board with me last year as an associate sponsor and wanted to feel it out,” Bohannan said. “They’re really excited about it and so am I. It’s a fun brand to be associated with.